I think losing weight is bad for your health.

Hemingway, you know that’s wrong.  Why would you say something like that?  Is it because you’re chunkier than I am?

I remember most of it, why?

When Mom came home from church she didn’t drive her own car home and she was a really funny color.  Even Uncle Bob was concerned and he got out this machine that measures how fast her blood moves around in her body. 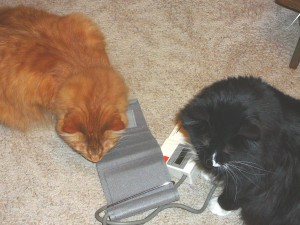 I was wondering what that thing did.  I kept talking while Uncle Bob was using it but he was ignoring me. 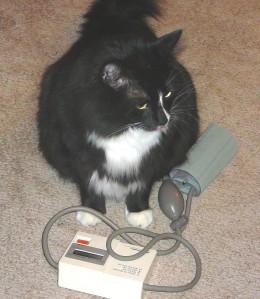 I asked Mom what was happening.  She said that when she was in church that morning she got real dizzy and felt awful.  She said she had to sit down during the choir anthem because she felt like she was going to faint.  She told me her doctor and nurse friends who are in choir with her checked on her after the choir left the platform.  They wanted to make sure it wasn’t real serious but they also wouldn’t let her drive home by herself.

Yes.  She talked to her doctor and was told that because she’s losing weight and eating healthier, she has to have her medications changed.  She said that’s a good thing, but I still think that losing weight is bad for you.  Just look at what happened to Mom.  I don’t want that to happen to me.

That’s just an excuse.  Come over here and check how much you weigh.  Mom uses this every morning and I’ve watched her so I know how it works.  We should both be as healthy as we can be so Mom will be proud of us.  Besides, Mom has lots more energy now and she feels better, so losing weight isn’t hurting her. 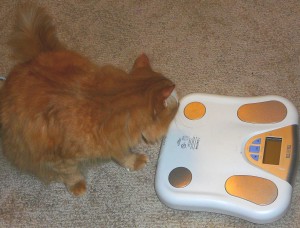 I guess you’re right but I sure hope Mom doesn’t make us go out on those long walks with her every morning.

She won’t do that ‘cuz she doesn’t want us out when it’s dark.  I think we’re safe…..unless we start eating too many treats.  What an awful thought!!!  If you get too chunky because you eat too many treats, then she’ll cut down on the treats for both of us.  Hemingway, don’t you get so chunky that Mom cuts down on our treats!  Get on that exercise bike right now.

Shakespeare, did anyone ever tell you that as a little brother you’re a real pain?