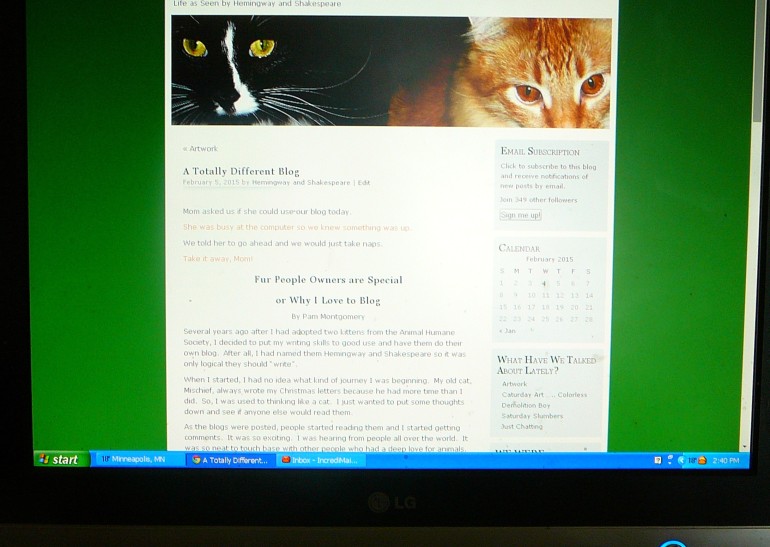 Mom asked us if she could use our blog today.

She was busy at the computer so we knew something was up.

We told her to go ahead and we would just take naps.

Take it away, Mom!

or Why I Love to Blog

Several years ago after I had adopted two kittens from the Animal Humane Society, I decided to put my writing skills to good use and have them do their own blog.  After all, I had named them Hemingway and Shakespeare so it was only logical they should “write”.

When I started, I had no idea what kind of journey I was beginning.  My old cat, Mischief, always wrote my Christmas letters because he had more time than I did.  So, I was used to thinking like a cat.  I just wanted to put some thoughts down and see if anyone else would read them.

As the blogs were posted, people started reading them and I started getting comments.  It was so exciting.  I was hearing from people all over the world.  It was so neat to touch base with other people who had a deep love for animals.  We were bonding over the common thread of enjoying the companionship and love that our fur people give us.

Months went by and we gained more friends and got to see wonderful pictures of other pets.  We shared our pictures and thoughts with humans and pets everywhere.  We laughed together and cried together.  The world was shrinking as we shared our lives.

This past Christmas was really special.  I noticed a special story on Facebook that really melted my heart.  There was a woman in Florida who was dying and her main concern was her cat.  While living in hospice, she continued to pay rent on her place so her cat would have somewhere to live.  Dorian Wagner got her story out (Joan and Isis) and soon people were doing whatever they could to help Joan and her beloved cat, Isis.   Joan’s spirits have improved so much since people started sending her notes and gifts.  More importantly, when Dorian arranged for Isis to visit, Joan (and Isis) were excited beyond belief.  It didn’t take much to help Joan.  She just wanted to see her cat and know that she would be alright.  Joan has been bombarded with gifts of her favorite snacks, jewelry, paintings, cards, letters and love.  All because Dorian heard about her plight and reached out to the social media to help.

This was in the back of my mind when I read about a local blogger who was having trouble buying things for herself and her cat.  She rescued her cat and the two of them are the best of friends.  Those of us who are animal lovers know exactly what that is like.  She lives alone so her beloved cat is her constant companion.  As I was reading about her problems, I knew I wanted to help.  I reached out to another local blogger to ask if she knew this blogger and if there was some way we could help.

After much planning and shopping, we were able to go to this woman’s apartment and give her several special gifts for herself and for her cat.  There’s nothing more thrilling than being a Christmas Elf.  To see how she took care of her cat was touching.  To see the love that an animal can give to a human was enough to bring tears to my eyes.

Several months back my sister’s cat developed some problems and they didn’t know if she would make it or not.  My sister is a special adult and has extremely incredible staff and housemates to help her.  After researching and trying out different foods, they finally found the food that worked and Scout the cat started gaining weight again.  The only problem is that the cat food is very expensive and my sister is on a fixed income.  The staff and others have generously provided help in purchasing the food and Scout is still doing great.  By the way, Scout was also a rescue cat.

Now, nobody can tell me that animals aren’t important.  Just look at the love that abounds in these examples.  Blogging has brought needs to my attention.  Blogging has let me reach out and help.  But it’s the animals who are so devoted to their humans that need to be praised.  They also need to be with their humans.

I think more hospitals and hospice units should allow the animals of their patients to visit.  I know my Dad would have loved to see his dog while he was in the hospital.  We ended up getting a stuffed toy that looked very much like his dog and even that perked up his spirits.  The love of an animal is so special that it can’t be explained.  It’s beyond human understanding because it’s without prejudice or experiences.  It’s just plain love!

There’s no way of knowing where all these thoughts will eventually take me.  I would love to see something where special adults who have pets and need financial help could get it.  I would love to see the time when those suffering from illnesses could feel the heartbeat of their beloved pet, or hear their purr, or see their wagging tail, or feel their gentle kisses on their hands.

With all the cruelty in the world today, my blogging friends have shown me another side of life.  We are special.  We love animals.  Call me a crazy cat lady, but I’m proud to be the owner of two wonderful fur people who keep me laughing and keep me reaching out to others.  A big thanks to my special blogging friends out there!