Mom said we should post this again since it’s that special day.  She was going to have us post it last night but she got too busy and forgot.  Then she was at the work place all day and after that she had to go practice singing (she still doesn’t do it right so she has to keep practicing….at least that’s what we think.)  This was first posted when I was just a kitten and didn’t know much.  I know lots more now!

Hemingway, what is Mom talking about?  I’m trying to figure out another one of those “human” things.   She said something about mayo in the sink.  I went and looked and I didn’t see anything.  Am I missing out on something?  Do you know what she’s talking about?

Shakespeare, you know you’re not supposed to be up on the counter.  I’m going to tell Mom that you’re snooping again.

Well, I’m just trying to figure out what all the excitement is about.  I even heard them talking about it on the news this morning when Mom was trying to wake up.

I didn’t hear anything about it but I was busy staring at the dirt again.  I love to do that.  Maybe I can become the world’s best “dirt starer” and make lots of money for treats and toys.

Hemingway, you are so strange.  How can I find out about  mayo in the sink?

We could Google it.  Mom showed me how to do that.

Hey, I never thought about that!

I can’t see when you have your big tail in the way, Shakespeare!

Hey…………is this what you were hearing?  Is it Cinco de Mayo?

Maybe.  I heard “mayo” and that made me think of sandwiches and you know I love bread.  I figured Mom had some sandwiches in the sink or something.  If there isn’t any bread involved then I’ll let the humans deal with the “mayo”.

Well, I’m not too sure what it’s all about but I don’t think they mean there’s mayo in the sink.  We’ll have to ask Mom about it when she gets home from work. 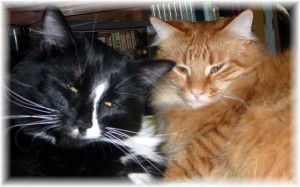