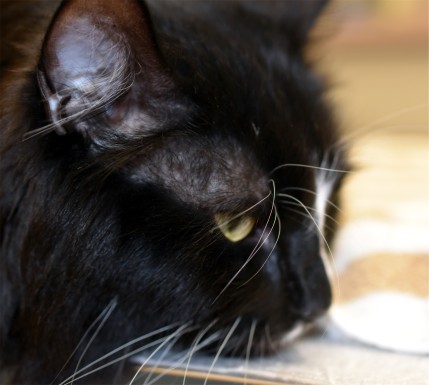 Mom let me out after supper tonight and I thought she was being so nice.  However, she started following me around.  I walked on the deck and she followed me.  I jumped down in the grass and she followed me.  What was she doing???  Next thing I knew, she had picked me up and was carrying me to the gate.  Now, she’ll tell you that’s not an easy thing for her to do.  I’m not exactly made of marshmallows.  Anyway, suddenly I was in the car and she was starting it!  What’s happening?

As usual, I had to try and get all my floofiness into that little basket.  I even had to get my tail in there!

Mom, it’s sooooooooo humiliating!!!  Why don’t you get in this box and see how you feel?  Then the doctor lady told you that I weigh just a little under 22 pounds.  I didn’t want her to tell you!  Now I’m not speaking to her, either.

What are you doing, doctor lady?  I told you I’m not speaking to you.  Do you want me to tell everyone how much you weigh?

Mom, please don’t let her take me!  I heard her say something about shots.  I also heard you tell her that I should have a “manny” “petty”.  I don’t know what that is.  I know I’m a man cat and I’m you’re pet so I’m hoping it’s something good.  (Readers…….don’t let those humans fool you.  I had my claws all nice and sharp for wrestling with Steinbeck and now they’re gone.  I found out a “manny” “petty” means “goodbye claws”.

I finally got home safe and sound and took a nap.  I heard Mom talking about me having to go back in June for some dental work.  I didn’t like hearing that!  I hope they all forget!

From the Mom:  Hemingway was so good at the vet’s.  He is the most mellow cat around and the doctor said she wishes all her patients were like that.  We will have to have a tooth worked on and possibly extracted.  I’ll take him in early in the morning and then bring him home at night.  It’s the first time he’s had any surgery and of course Mom is worried.  For now, we’re just going to have cuddle time.