Hey Readers……….It’s me……Hemingway!  I just want to let you know that I’m doing fine.  Mom gives me a little pill in the morning and it makes the space where my toofie was feel better.  She’s been giving both of us wet food and we like that.  I sleep lots during the day so I can be up all night.  hehehehehehehe

I can verify that!  He kept both Mom and me awake last night.  I was just trying to take a warm cozy sleep with Mom and Hemingway just kept dancing around.

From the Mom:  I can also verify that he didn’t sleep!  For one thing, he kept climbing up on my head and stretching himself across my face.  I seriously think he was trying to suffocate me for taking him to the Doctor’s house.  He has been head bumping with great force.  He has also been even more like velcro than before.  He keeps rubbing his face against me and I suppose it’s because the gums hurt.  I can put up with all that, but the trying to suffocate me trick is not appreciated.  One other thing, the doctor had said he had protein in his urine and they wanted to run another test to make sure he didn’t have high blood pressure or the start of kidney disease.  We got the results today and it was all clear.

I never ate any protons!  If I did, maybe Steinbeck put them in my dish.  I know I’ve never asked for any protons!  Do they taste like catnip?

Hemingway, you’ve been hanging around Steinbeck too much. 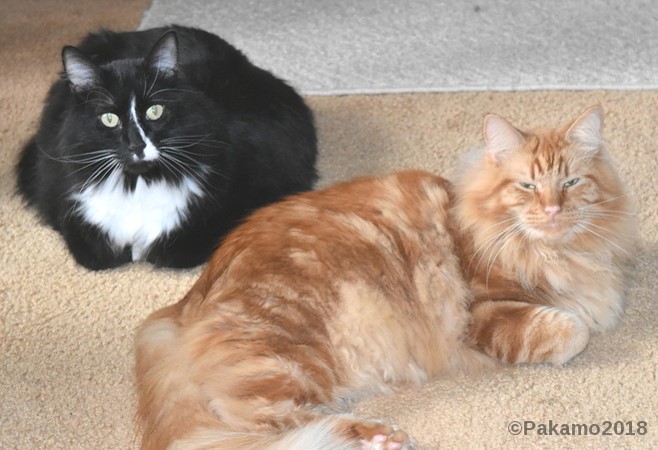